In Europe this week, the travel industry provided me with two quick stories that illustrate the best and worst of customer experiences.

The first was a perfect example of ease and empathy.  Having been at an event in Brussels where rail operators were showcasing some great case studies on how they are using customer experience thinking to create better and more profitable organisations, I needed to return to the UK a few hours earlier than expected. Somewhat ironically for being at a rail conference I was flying so headed to the BA customer desk in Brussels airport.  At that point in time my expectations were low;  at best there would be extra cost and hassle, and that was assuming there was room on an earlier flight. Still, I needed to get back so took a deep breath and asked what could be done. Less than two minutes later, I was checked in on a flight that (luckily for me) left in 45 minutes.  No cost, no judgement, no hassle.  Just smiles and when I asked if there was a catch, there was a real sense of “No, you wouldn’t have asked if you didn’t have a need to change, it’s just what we do”.  From a customer experience perspective, it was one that allowed me to do what I wanted, it couldn’t have been easier and it took away a whole heap of anxiety about not being where I needed to be. 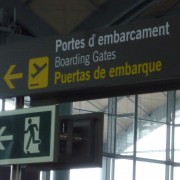 Contrast that then, with an horrendous experience I was told about earlier that same day.  It concerns a European rail operator whose trains operate across borders and therefore has an added layer of airport-type security as part of its boarding process.  On this particular day there was a delay in processing people (an awful expression, but that’s for another blog, another day).  With departure time rapidly approaching a call went out to try and fast-track passengers but that was not sufficient.  The train left on-time, with some passengers left behind to get the next one.  Even those who had managed to board the train had been in a state of stress and were now perplexed and angry that fellow passengers had been stranded.  According to on-board staff at the time, it was not a one-off event.  Just as concerning was the suggestion that, while any disruption is ideally avoidable not least because of the costs and logistics involved, the enthusiasm to leave at the scheduled hour whatever the circumstances was driven by keeping on-time departure metrics high.

The lesson is clear and yet is as old as the hills; if we measure things without the context it is meaningless.  There is a board of directors somewhere looking at the on-time departure figures thinking “Aren’t we giving our customers a great experience!”.

And yet with a little empathy, open lines of communication between stakeholders and a smile, things can be so much better for the business because it’s better for the customer.  Good and bad experiences will get shared; the good ones are not always about money but they will make more money in the long-run.  The bad ones however will always be about cost and end up being very costly.  For me, I’ll fly next time for sure.