The delicate, reciprocal balance of any alliance between airline and passenger shifts dramatically when there’s a planned or unplanned change in schedule. One party very quickly becomes totally dependent on the other to get them through the next few hours.  It puts the relationship on a knife-edge with the stakes and expectations equally high.

Get it right and we know the benefits of salvaging relationships that have teetered on the edge.  Get it wrong and research shows that the majority of people won’t even complain; they will simply take their contribution to load factor metrics elsewhere.  Abigail Comber of British Airways summed it up succinctly recently when she said: “The best products in the world are no good if they’re not delivered brilliantly”. 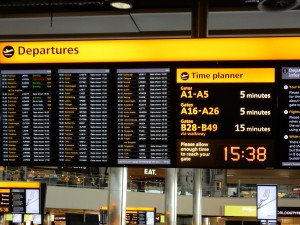 To have and to hold

The longevity of fulfilling relationships between people or between people and brands will not survive if, so we’re told, one party feels the other is showing it any trace of contempt.

Passengers travel for a reason.  Arrangements have been made with people at the other end. So where there’s a loss of certainty, it’s no surprise that anxiety levels rise. And while passengers accept that some delays are unavoidable, expectations are quite rightly very high that information will be timely and accurate and that action will be swift.

As passengers, we expect the airline to respond and communicate in a timely and relevant way.  We don’t know or, frankly, care whose responsibility it is.  What we don’t expect or want is any suggestion that the airline doesn’t know, care or acknowledge just how important and emotive the situation is to us at that moment.

How the airline responds has a direct consequence on how it makes people feel.  And that is what they will remember next time they come to choose who to fly with.

Seeing it from the other person’s perspective helps know what to say, when and how in a way that not only protects the relationship in times of instability but strengthens the bonds of trust for the future.

How a passenger expects to be treated is not set by today’s airline or by other carriers who do things better. When they’re not being a PRN, the same people are doing business with, or are hearing about, a raft of other organisations each day.  They might be online retailers, telecoms providers or local cafes.  Some of them simply get the basics right every time, some do unexpected things we wish more companies would do, while others are horror stories to be wary of.

When there’s a problem developing we’ll hear about it on the radio, followed by an advisory to “Contact your airline for more information”.  Passengers expectations are changing though from “Ok, I’ll do that” to “They’ve got my details, why haven’t they contacted me?” and “What would have happened if I hadn’t just heard that radio broadcast?”.  In fairness, more airlines are taking a more proactive approach not least because automating the initial message reduces the cost of handling volume of inbound calls and frees up finite resource to focus on the passengers who need help the most.

Such are the expectations that the perception of the response takes on a sharper focus.  Consider the airline that sends an SMS inviting a passenger to book travel insurance through them but is silent when a flight has been cancelled.   A passenger can be forgiven for thinking “The airline had no interest in me other than getting me to spend more money”.  People do have a choice and so the consequences for airline and airport are predictable.

Your brand in their hands

The very nature of an airline’s business model hands over the delivery of many aspects of the brand and passenger experience to a third party.  In many cases it’s seamless but that’s not always the way.  Sullen gate staff and disengaged baggage handlers have the ability to throw away millions of dollars worth of brand building in an instant. 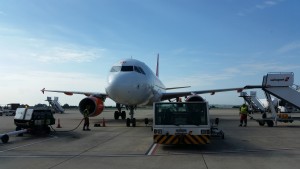 Whatever the posters on the wall say about putting customers first, unless everyone in the chain understands why that’s important, how it will be delivered and how success will be measured, the nicely-worded platitudes are meaningless. The myopic focus on costs will prevail without a view of the consequences of that cost obsession.

Outsourcing the sensitive management of communications that are natural around disruption can be a sound commercial move but also requires high levels of understanding between airline and agency.  I spoke about the issue to John Milburn, general manager at Bosch Service Solutions who handle customer contacts for a number of leading global airline brands.

John told me: “Our client’s knows how critical it is to get the right information to the right people in the right way.  They take our agents to their in-house brand training facility to immerse them in their  brand and crucially allow them to experience what their passengers should expect ether flying economy or first-class, and – importantly – why. It means that when there is a problem our people can be highly empathetic, managing a relationship rather than executing a transaction”.

According to Flightstats, in the 30 days to mid-August 26,300 flights were cancelled globally with 692,000 being delayed.  With an average 100 people on board, that’s the best part of 700 million people having their plans disrupted – in one month.

So with my passenger hat on, compensation rules aside, it’s not unreasonable for me to think that if something changes, the airline will be well drilled in letting me know important information.

Airlines can compete on costs, metrics and processing efficiencies but as Ryanair is discovering with its “Always Getting Better” initiative, there are greater commercial rewards to be found by paying more attention to the things customers are most interested in – and that includes communications at the most important times.  I wrote a blog just recently about how high up the agenda a customer focus is for the airline that not so long ago appeared proud of the contempt it shows passengers (read here).

It’s a trend that disruption management specialists 15below have also seen.  They report a rapid growth in the demand for its collaborative workshops that help airlines understand what it’s like to be the passenger, what they should do and how.

At a recent event in Dubai, 15below highlight some very telling facts, including that of the top 10 on-time performing Middle East and African airlines, 21% of their passengers are – over 8 million a year – are disrupted.

Yet the workshops reveal that while the intent in one part of an airline is good, significant barriers still remain.  Doing things on the customer agenda remains a contentious subject in many a boardroom in any sector, not just airlines.  If a business case cannot show an immediate ROI it won’t make the short-list.  The marketing and customer experience teams might be making the right moves and articulating the cost of lost customers.  But if the culture means their insight is not adopted by every other part of the business, the focus will remain on doing the wrong things really well.

IT understandably has a loud voice at the table and often wants to manage innovation and change in-house.  Falling into the clutches of its normal programme management governance and competing for resource around the business equally retains control over the time-quality-cost triumvirate and helps negotiate the portfolio of legacy and merged systems, but anecdotal evidence suggest it often slows things down too.  And that simply lets others get ahead.

15below has some sound advice (and a JetBlue case study here) to help airlines do things better.

Strike a better balance between automation and human communications.  Technology offers some fantastic opportunities for handling issues of scale. But airlines must also recognise when passengers need reassurance that comes from speaking with a person and not interacting with an algorithm.

Solving the problem before a passenger knows it exists is also a way to retaining passenger faith.  Making it easy to understand what’s happened, making it easy to talk to someone about their own specifics and having a ready-made solution in place takes a little effort but is immensely appreciated.

Proactive communications with those who are expecting the passenger such as hotels or family takes the experience to another level. Automated voice messages are more popular in the US than in the UK.  But calling at 2am or assuming that a passengers first language is English despite what they’ve already made clear is not right either, yet it happens.

It is well accepted that there are three elements to the customer experience.  Did it do what I expected it to?, Was it easy? and How did it make me feel?  Research also shows it’s not an equal three-way split in terms of importance.  The memory of the emotional aspect from last time can drive upwards of 70% of decision-making for the next time.

So passengers are far less likely to buy a ticket from an airline that has previously showed them any degree of contempt, whatever the customer charter and brand promise say. The brand is what passengers tell others it is, not what the strapline says.  They have a voice and they have a choice.

Airlines who still see no reason to change or who don’t make the right changes will therefore get left further behind by those at the next gate or the next airport who do get it.

The stakes are high, the expectations are high.  It’s not just a relationship that’s under threat or about to flourish – by definition its also revenue, load factors and forward bookings.  And none of those want to be disrupted.

Jerry Angrave is a Certified Customer Experience Professional and consultant.  Managing Director of Empathyce, Jerry has worked for or with organisations in the aviation and travel, retail banking, utilities, legal services and pharmaceutical industries.

Jerry will be chairing sessions a the AirXperience event in London in September 2015 – feel free to ask Jerry any further questions on this subject.

How not to increase the customer experience scores

Customer Experience at the Board table: a voice, a vote or a veto?

Customer Journey Mapping - a fun day with sticky notes or a strategic and cultural catalyst?

The (not-so subtle) differences between Customer Experience and Customer Service

What happened to our Brand? It dropped through the gap between Customer Service and Customer Experience...