I’m happy to be corrected but, as Vivian, Julia Roberts’ character in Pretty Woman said: “Big mistake.  BIG.  HUGE!  I have to go…”.

Who wins as a result of this change?  United say it’s to reduce the number of boarding phases.  In theory that should cut down on turnaround times and therefore costs.  I’m guessing there are operational and commercial benefits involved because it’s not clear to me who else will benefit.

Leaving aside the debate about whether those with premium or standard tickets should board first, frequent business travellers and those without kids may initially welcome the news.  After all, airlines get a bad rap from passengers who are not able to stake their claim to what space is rightly theirs in the overhead bins because it’s been stolen by an excess of toys, nappies, food, spare-clothes and car-seats.

The solution is, quite simply, to board together.  So if we were to carry out some high-level customer journey mapping (ie give it a bit of thought) what does that experience look like from a passenger’s perspective?  Hmm.

Even with well-behaved kids and a relatively smooth journey, by the time parents get to the gate they will have endured the packing, the journey to the airport (“Are we there 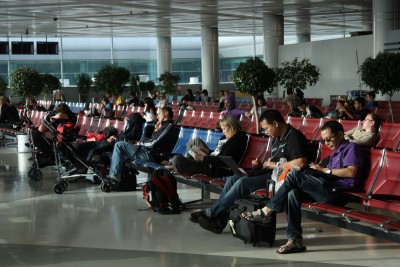 yet?”), the car-park, the bags falling off trolleys, keeping the kids occupied at the check-in line, finding where to go next, making sure they’re fed and watered, waiting again to go through security, one of the kids needs the toilet and then finding somewhere to pitch up in Departures while keeping one eye on the kids and one eye on which gate to trek to.

And that’s before we consider what it’s then like as a single parent with kids who are totally out of routine and exhausted or for those who have varying forms of Special Needs.

At least actually getting settled into the seats was relatively straight-forward  Until now.  Will families really choose an airline that says to them they now need to scoop up all their things and kids and run the gauntlet with everyone else, hoping that the seat allocations are error-free and their toddler doesn’t get clouted on the head by a bag squeezing past.  Flying with kids is a challenge at the best of times so adding another layer of anxiety and uncertainty isn’t the most effective customer loyalty scheme I’ve seen.  On top of that, most parents I know are very aware that kids are not everyone’s favourite in confined spaces and will genuinely be concerned that by holding everything up as they walk slowly to the aircraft it only makes the situation worse.

For those without kids, it doesn’t get much better either.  To have young kids walking from the gate to aircraft while everyone is in more of a rush is bound to slow things up.

At best it’s frustrating, at worst dangerous.  In the process of sitting down, it naturally takes longer for a parent to sort out things for their children so not only is it likely that they will end up with less overhead space than they are entitled to but everyone will get tangled up and end up even more frustrated.

Going back to United and what’s in it for them.  They might raise revenue from those families and travellers who can and want to pay for pre-boarding or to have everyone sat together.  I understand why core and ancillary revenue is so vital but when those things are perceived to be freely available at the next check-in counter along the line, I’m still not sure it will offset the damage from lost customers long-term.  It’s certainly not strengthening the brand positioning to be “the airline customers want to fly”.

Meanwhile, their competitors must be quietly humming away the theme tune to Pretty Woman…

Customer Experience says: If I leave, don’t slam the door. Leave it open... How sport shows us to be better at customer journey mapping
Scroll to top