The build-up to this week’s election in the UK has been rooted in uncertainty. If the media reports are to be believed, no single party has been persuasive enough to win over the backing of a majority for the changes they believe in. Time will tell.  It also provides topical food for thought about the role of the customer experience professional in influencing change.

For those leading and managing customer-led change it can be a daunting prospect. Understanding what to do and how to do it is one thing; convincing others is quite another. Metric-obsessed stakeholders, divisions that operate  with seemingly no common objectives and teams that should but don’t talk to each other are just some of the regular barriers.

Finding a little, genuine, inspiration is hard to come by. Books, budgets and “We put customers first” posters don’t change things.  People, attitudes and belief do.  And more often than not the biggest changes start with the smallest steps; people sharing their passion. 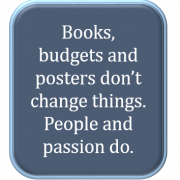 In my job as a customer experience consultant I get to meet many people who are pushing the agenda forward with one hand while having to pull the organisation along with the other. One example in particular stands out.

A global organisation that generates annual revenues in excess of $40 billion became complacent about its big numbers.  Unintentionally, it put increased competition and disenfranchised customers into its blind spot. Cutting margins to sell more and aggressive M&A activity only mask the underlying issues. But the passion of one of its 75,000 employees is bringing about a huge change, one that is making the company redefine and renew relationship with customers it thought it knew so well but in reality was clinging on to them by a thread.

How? Rather than try and change everything all at once, a series of small steps is leading to a giant leap compared to where they were. One individual, armed with passion, knowledge and evidence about what an authentic focus on customers can achieve commercially.  He engaged people close to him and showed how customer experience thinking can help them achieve their own objectives. He initially built a small group of highly engaged people at all levels who then in turn shared the belief about what the right changes could bring with their stakeholders.

From there, the engagement spread using sometimes brutally uncomfortable customer feedback as the catalyst. It’s just the start, but that company is changing its own culture, it is actively immersing its employees across many countries in customer experience and revising its activity plans.  If an organisation has personality, this one is showing real signs of the passion and belief of the individual who started the change.  It is starting to bring about the right changes effectively and efficiently rather than doing as much “stuff” as it can in the hope that a proportion of it lands ok.

One voice, with real belief can make massive changes with the momentum it creates. One other timely example comes from this week’s election.   The political colours of my home town Cheltenham have at various times been Conservative blue or Liberal yellow. But not the red of Labour. Having lived there most of my life I cannot even remember seeing a red poster stuck in the front window of any house at any election. Until now, due to the passion and belief of one person about doing what he believes is the right thing.

The party is irrelevant; the change it represents is significant

Paul Gilbert is CEO of a successful management consultancy showing in-house lawyers around the world how to fulfill their potential and how to be better business people. But this week, Paul also steps up to be counted as the Labour party’s candidate to be Cheltenham’s MP.  As an aside, his politically agnostic post here about why voting is about us rather than a specific party is well worth a read.

This is not a blog to promote one party over another.  It is about having the confidence in doing what is right that leads to the first small signs of change.  Even Paul would admit that based on past performance the party HQ statisticians will say a victory is highly unlikely.  But in a population that looks in one direction he has managed to get some to look at things in a different way. It started with one small step; to simply talk about what he believed in and why.  His generous, self-depreciating approach hides one of the sharpest minds and the empathetic way he communicated made people sit up and take notice. As a result, he became a parliamentary candidate for the town and such is his passion that strangers are now happy to advertise to the world that they will vote for him.  Don’t get me wrong, we are not about to see a political upheaval.  The signs appearing might be few in number and small in size but they are a metaphorical sign that as daunting as changing other people’s own beliefs may be, it is possible.

In the coming days and weeks we may hear a lot more about the Citizen Experience as the election events unfold. In the meantime, the rest of us don’t need to convince a whole country that voting for customer experience is the right thing to do; if we share the passion and belief, big changes can start to happen, little step by little step.

What are your thoughts on leading the very beginnings of change?

Are we talking the right language of customer experience?

When the sales experience falls into, rather than bridges, the gap

Customer experience without trust is costly

Customer Experience says: If I leave, don’t slam the door. Leave it open so I can come back.

Customer Journey Mapping – as relevant and as possible as ever

Q: The difference between Customer Service and Customer Experience? A: Emotion-driven behaviour.

There’s no need to measure customer effortBritish Gas and United: learnings from their customers with special needs
Scroll to top